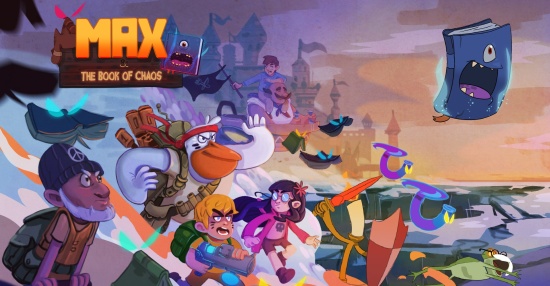 Max and the Book of ChaosJanduSoft

I WANT THIS OFFER!
woovit.info/maxandthebookofchaos

“Max and the book of chaos” is an arcade 2D action game with elements of run and gun and shoot ´em up classic video games, focused on giving to the player a true arcade feeling experience. The game also offers mechanics of upgrading equipment and some features for Max. And all of this mixed with and interesting and funny story to create a unique narrative lore with a cool cartoon graphic style.

Super pang: For the levels structure.

Metal slug and the bug butcher: Thinking about the action mechanics.

Pop culture: the story has a lot of references to icons of the 80´s / 90´s movies, comics, and literature…

The story take place in an old castle that has become a summer school. But the castle hide a lot of secrets. A legendary old book that has the power to open portals between dimensions and times lies there. This book is imbued with the power of the dark matter and has been hidden for millennia. But now Someone has unleashed its power. The portals has been opened and our world has been invaded by hordes of strange, fun and chaotic enemies. And YES, Max Racoon is our only true hope.

The game occurs in closed stages. Each stage has 6 levels of difficult, from lower to higher. So we have levels for a casual and light experience and other levels for the hardcore player that search for a challenge.

Playing the levels: The main objective is to survive a certain time to waves of enemies. Moreover the player must rescue the maximum number of friends locked in jails. The more friends the player rescue the more STARS he obtains. The stars unlock new stages and final bosses. Also, by killing enemies, the player will obtain coins that can be used to buy equipment, abilities and cool stuff.

Our philosophy is “easy to play but hard to master”, so we have the basics.

The player can jump, shoot and dash in order to avoid get killed. The flow of the game is fast, funny and chaotic so requires of reflexes and ability